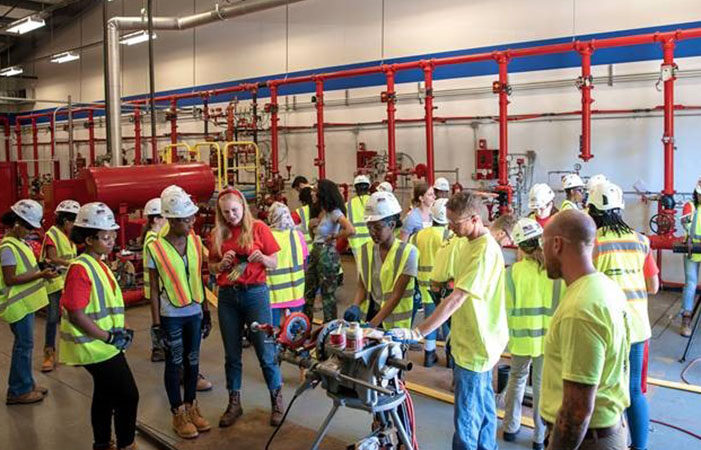 Last week, Oliver’s very own Allison Calder helped to plan NAWIC’s 10th annual MyWIC (Mentoring Young Women In Construction) Camp. MyWIC Camp is a free six day camp for 7th-12th grade girls to introduce them to potential careers in construction. This was Allison’s third year being involved with the planning and this year, the campers visited Carpenters, Finishing Trades, Insulators, Electricians, Laborers, and the Sprinkler Fitters!

One morning at Sprinkler Fitters 692. The shop was broken up into different stations and an apprentice was supervising each station. The girls got to cut/thread/groove steel pipe, cut in mechanical tees, cut hangers, and cut & glue CPVC thanks to the help of our apprentices Matt Smith, Jake Pettis, and Jim Bernard. They had a blast!

On the last day of camp, the girls visited PennFIRST Pavilion for a job site tour. PennFIRST is a 1.5 billion dollar hospital providing 500 patient rooms. Oliver is the fire protection subcontractor for this project. It was great for the girls to see all the trades come together under one roof!

Top 5 Reasons Why a Fire Protection System is Important

How to prepare for your facility’s ITM (Inspections Testing & Maintenance)